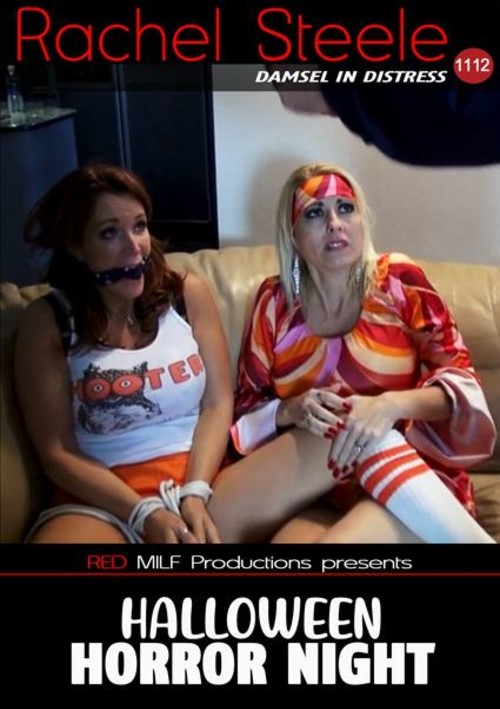 Damsel In Distress 1112 - Halloween Horror Night
MILFs Rachel and Dallas arrived home from a disappointing Halloween party. After spending a while talking about the creepy guys who had tried hitting on them that night, they grew tired and turned in. Rachel curled up to lie down on the bed in her in the room. She was still clad in a Hooters outfit. Meanwhile, Dallas stretched out and dozed off on the couch in the den. She too remained in her fancy dress. Hers was a psychedelic hippy-chick outfit. He was one of the creepy guys from the party. In fact, he was the creepiest - and most dangerous - of them all. A long-time sex-predator, he had gotten one look at Rachel and Dallas, and decided to make them his next victims. Now, having tailed them back to their home, he was all set to act. First, he crept upstairs, located Rachel, sneaked right up to her, and clamped a hand down over her mouth. Rachel woke with a start, tried to scream and wriggle free. But the man was too strong for her. Maintaining an eerie silence, he signaled for her to be quiet - or else. Rachel cowered before him and attempted to stay calm. It was no use. Once or twice she forgot herself and tried to negotiate with the man. All she got for her efforts were a couple of stinging blows across the face. Next the man made her wear a gag, tied her wrists together with a length of cord, and used one of its loose ends as a kind of leash with which to drag her out and down to the den. There he made her sit on the couch. Then, unhindered, he approached the blissfully unaware Dallas. As he had done with Rachel, he lay a strong hand over her mouth while she rested. Dallas' eyes opened wide, and she immediately started to struggle. But again the man prevailed - gagging and binding her in the same way as her friend. With both MILFs now rendered helpless, he was able to take advantage of them with ease. He began by pulling their big tits out of their tops and giving them a heavy fondling. Then he parted their legs, yanked aside their panty crotches to expose their defenseless pussies, and rubbed and fingered them. Rachel and Dallas sobbed through their gags the whole time. From his outfit, they recognized that the man one of the guests at the Halloween party. They didn't, however, know his true identity. Presently their ordeal worsened. The man made them kneel together in front of him and give his big hard cock a long and sensual blowjob. Neither MILF dared oppose him. Despite their distress and revulsion, they did all they could to pleasure their captor - to calm him and make him less dangerous. They licked his shaft all over, tongued his balls, and sucked on his cock. But these efforts merely made him want to fuck them all the sooner. The women told the intruder that he could do whatever he pleased to them. Having been made to bend over the couch, their shapely, naked butts sticking out, the MILFs braced themselves for infraction from behind. The man began with Dallas. She moaned with a mixture of misery and involuntary arousal as he pounded his cock deep and hard into her. By the end of the fucking, she was exhausted and half out of her mind. Rachel got it next. The man had reached out to finger her pussy while fucking Dallas. Now he had her wet against his will. Pushing Rachel onto her back, he first took her aggressively in the missionary position. Rachel's nipples stuck out from the pulled-down top of her Hooters shirt. Reluctantly she moaned, bit on her gag, and arched her back as her body tensed with unwanted pleasure. Later she got the same intense doggy-style fucking that Dallas had had. Finally, the man made the two MILFs suck him off one more time. Keeping their faces close together, they had to take a load of his erupting cum on in their mouths, over their lips, on their chins and cheeks. A streak of it even coated Rachel's eye. It was a grossly humiliating climax for the friends. Yet the man remained frighteningly cold. In response to their renewed sobbing and their weak pleas to be freed, he raised a finger in a menacing gesture for silence. He then re-gagged his victims and strode away for a break. Rachel and Dallas were left to sweat over would happen next.