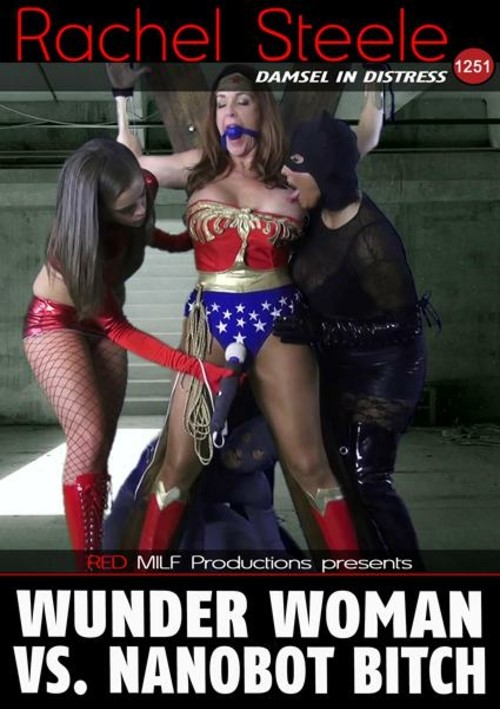 Damsel In Distress 1251 - Wunder Woman Vs. Nanobot Bitch
ADC agent Diana Prince receives a call from the police commissioner saying that the governors daughter has been taken prisoner by a formidable new villainess known as the Nanobot Bitch. Horrified at the news, Diana promises the commissioner that IADC will do all it can do to rescue the girl. She then hangs up, and promptly steps into a clear space in her office. Her arms stretched out at her sides, she suddenly spins herself around. A flash, a bang, and the bespectacled agent is now transformed into the feisty superheroine Wunder Woman. Only she can save the day - and she does not have a second to lose! Meanwhile, the Nanobot Bitch and her two minions are in her observatory, scheming devious schemes. The voluptuous female reclines on one side of her mistress. The lecherous Nano Minion kneels at her feet. Occasionally he reaches out to touch the Nanobot Bitch - only to get a slap, and a better understanding of how she got her name. One moment the Nanobot Bitch is cursing her minion, the next she lets out a laugh of wicked triumph. She has finally figured out how to capture Wunder Woman and bring her to her knees - literally. A short while later, the Amazing Amazon arrives at the outskirts of the Nanobot Bitch's compound. She was led there by inspired investigation and super-intuition. Little does she know it, but the Nanobot is delighted at her arrival. On a security camera screen in a control room, she, Black Diamond and Nano Minion watch Wunder Woman sneaking through the grounds, dashing from the cover of one tree to another, vainly trying to approach the XXXX undetected. When she finally made it inside, Black Diamond and Nano Minion are waiting for her. The laugh with excitement at the thought of confronting Winder Woman and defeating her. But they do not bank on what a fine fighter the Amazing Amazon is. Spurning her customary peace offering, they recklessly close in. What follows is a skilful series of maneuvers by Wunder Woman. A knee to Nano Minion's breadbasket, a chop to his head, and he is down on the floor. Next it is a grappling match between her and Black Diamond. Summoning all her Amazonian strength, Wunder Woman overpowers her adversary, striking a blow to her chest to knock the wind out of her. Briefly, Black Diamond and Nano Minion attempt to rally for a second attack. But now Wunder Woman is ready for them with her golden lasso. Before they know it, both minions are caught up tight its' in loop. Where is the Nanobot Bitch? Wunder Woman demands of them. Black Diamond does not want to tell her, but the lasso's powers XXXX her to speak the truth. In the observatory up the stairs! she answers through gritted teeth. A moment later, Wunder Woman has broken in upon the Nanobot Bitch, dragging Black Diamond and Nano Minion after her. In their ensuing confrontation, Wunder Woman is happily surprised. The Nanobot Bitch offers no resistance to the Amazing Amazon. Instead she graciously surrenders herself and congratulates her on a job well done. Wunder Woman's righteous fury softens. She is impressed by the Nanobot Bitch's show of humility. Nevertheless, she will still have to arrest her and take her to the police. The Nanobot Bitch acknowledges this, but requests that it happen in a dignified way. Thus she convinces Wunder Woman to remove the lasso from Black Diamond and Nano Minion since they are sufficiently beaten and embarrassed.