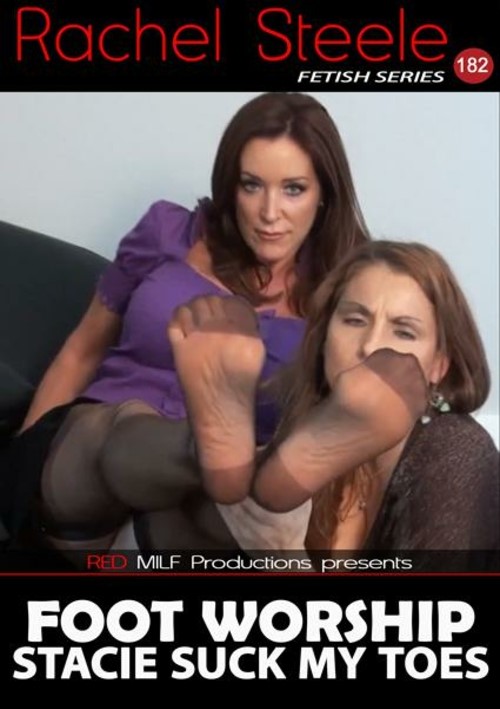 Fetish 182 - Foot Worship - Stacie Suck My Toes
Stacie bought several new pairs of shoes. She was checking them out when Rachel called round. Together the two friends sat admiring and commenting on the different shoe's qualities - their shapes, styles, colors, heels. Rachel then stretched out her long, sexy, fishnet stockinged legs, and showed Stacie her own pair of shoes. A kind fan called Stain had purchased and mailed them to her as a gift. Stacie liked them as much as Rachel did. Their look was very sleek and classy. After a while, the shoes came off, and Rachel rested her bare feet in her friend's lap. Being a foot-fetishist, Stacie enjoyed getting to examine and touch them. While massaging Rachel's feet - the soles, arches and toes - she praised their prettiness and asked Rachel about her foot-wear and foot-care habit. Rachel gave her a detailed reply. She then mentioned how standing up all day at work in tight shoes had given her bunions. Stacie studied them through Rachel's sheer stockings and found them very intriguing. Before long she was kneeling and caressing Rachel's feet with more fervor than ever. While Stacie ran her hands back and forth over Rachel's silk-clad legs, Rachel leaned back contentedly - the pose causing her short skirt to show her stocking-topped thigh. Soon after, the two friends became even more intimate. Rachel placed her feet on Stacie's big breasts and kneaded them with her soles. Stacie sighed and cooed, then took hold of Rachel's feet and sucked on several of her stocking-covered toes at once. Following that, Rachel got up and put on a pair of white high-heels. Elegantly she paced around and posed in them. Stacie, on her knees, was almost worshipful in her study of Rachel's feet. She got great pleasure from looking at the way her friend's bunions bulged in the shoes and effected their shape. When Rachel took the shoes off, Stacie returned to rubbing her bare-feet and kissed them. Rachel then modeled several other pairs of shoes and celebrated their various styles. This led Stacie to becoming even more infatuated with Rachel's feet than ever. She showed it by giving them a long caressing, kissing and licking. Rachel herself grew excited from the constant hot sight of her kneeling friend's cleavage. She wanted to touch her feet to it again. When Stacie granted her the pleasure, Rachel really went to work - pressing her silky soles upon Stacie's bare, spongy breast-flesh. Stacie became so turned on as a result that she lay back on the floor, parted her legs, and invited Rachel to rub her foot up and down her exposed panties crotch. Rachel duly did so - effectively fucking Stacie's humping pussy with her bunion. Both women enjoyed themselves immensely, and Stacie ended up orgasming. Here Stacie she apologized to Rachel - fearing she had gotten pussy juice all over her pretty feet and nice silky stockings. Rachel didn't mind at all. She'd had a great time playing with her friend. Afterwards, they sat relaxing. Even then Stacie couldn't resist Rachel's feet, but continued to touch, lick and smell them.