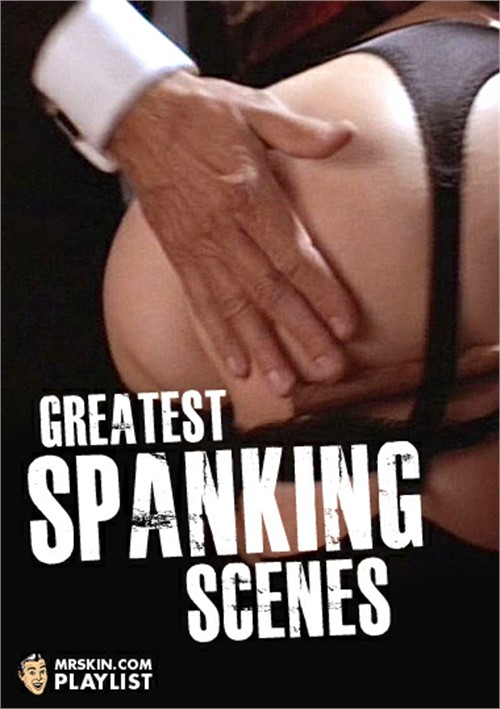 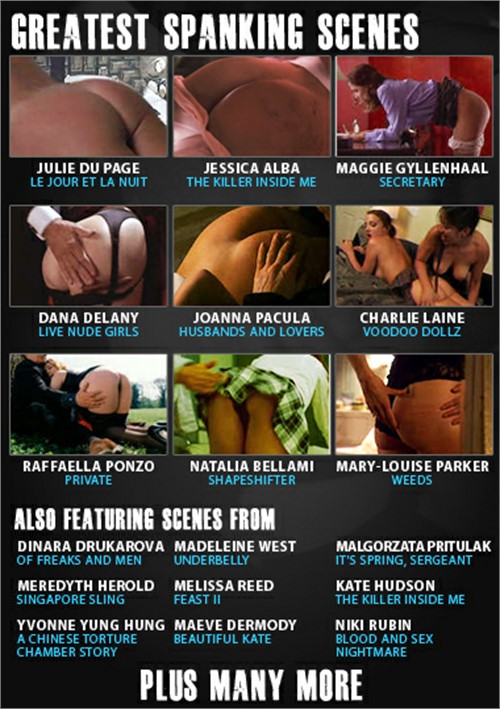 Greatest Spanking Scenes
You'll be giving yourself a spanking when you see these ripe, round celebrity cans bounce as they take a rhythmic pounding in Mr. Skin's Greatest Spanking Scenes Ever playlist. This 22-scene playlist features a wide range of sexy stars baring their rear ass-ets (as well as rack and rug) as they bend over, lie down, and get draped over guys' knees to receive some stiff discipline. First up is Julie DuPage, who gets her ass smacked raw by an enraged older man in 1997's Le Jour et la Nuit. Next, Jessica Alba bares that famous Alba ass as Casey Affleck throws her onto a bed and whips her bare butt with his belt as she viciously fights back in The Killer Inside Me (2010). Then, check out more from The Killer Inside Me as Kate Hudson gets a bare hand on her bare butt. Then Maggie Gyllenhaal pulls down her panties and spanks herself with a brush in the kinky comedy Secretary (2002), Brunette Dana Delaney ecstatically receives a bare-handed spanking wearing a black silk garter belt and silk stockings while a room full of men watches in Live Nude Girls (1995), Joanna Pacula cries as she gets her butt spanked by her husband in a rough scene from Husbands and Lovers (1992), Syren administers a topless spanking to the equally topless Charlie Laine before tossing her salad in the softcore flick Voodoo Dollz (2008), Keira Knightley gets some sexual healing from the good Dr. Jung (Michael Fassbender) as he ties her to a bed and spanks her with his belt in A Dangerous Method (2011) Yvonne Young Hung gets her bare ass rhythmically paddled by two men in A Chinese Torture Chamber Story (1995), Curly-haired brunette Meredyth Herold bares butt and a hint of bush as her mother spanks her, gags her, a fucks her with a dildo in Singapore Sling (1990), Japanese tart Marie Jinno bound with rope and whipped with a crop in Tokyo Decameron (1996), Zaftig French maid Rafaella Ponzo engages in some kinky lesbian foot play and rubs off her fully nude mistress before a guy comes in and spanks her with a paddle in Private (2003), Topless brunette Natalia Bellami being spanked in a schoolgirl uniform and pigtails in a roleplay scene from Shapeshifter (2005), Fully nude, fantastically furry Euro tart Dinara Drukarova kneels over a prayer bench and gets beaten with reeds by an old lady in Of Freaks and Men (1998), Aussie blonde Madeline West bends over her boyfriend's lap as he pulls down her lace panties and smacks her ass on Underbelly, Two spanking scenes with hot MILF Mary-Louise Parker, once getting whipped soundly with a belt and fucked bent over a bar, then being draped over her boss's lap and spanked in the back of a limo, on Weeds, Tatted-up punkette Melissa Reed gets her ass smacked by a dwarf in Feast 2 (2008), Blonde Brit Maeve Dermody bares boobs and implores her guy to spank her harder in Beautiful Kate (2009), Niki Rubin bares tush and shaved bush as she strips down to nothing but a bra and a wig before being spanked in Blood and Sex Nightmare (2008), Brigitte Bardot gets thrown down onto a bed and has her bare butt spanked in L' Histoire tr?s bonne et tr?s joyeuse de Colinot Trousse-Chemise (1973), And then pretty Polish girl Maolgorzata Pritulak gets her ass whacked with a frying pan in It's Spring, Sergeant (1974). Finally, Italian eyeful Sydne Rome gets laid one her lover's lap and smacked silly in La Sculacciata (1974), a fully nude Monique van de Ven gets a carnation stuck up her ass and then her cheeks spanked hard in Turkish Delight (1973), soft core slut Kira Reed compares her cans to those of another girl, who then paddles her with a hairbrush, in Cheerleader Ninjas (1998), Sean Young is roughly tossed on a bed and spanked with one tit hanging out in Love Crimes (1991), Natalia bares some more boobage smacking her guy around in more footage from SHapeshifter (2005), foxy frau Carmen Russo bends over to get spanked in sheer white panties in the German flick Mia mobile torna a scuola (1981), thong-clad blonde Sirena Irwin gets thrown around like a rag doll and her butt roughly spanked 'til it turns bright red in Whacked (2004), and Shavon Ryan gives her fellow topless brunette Stephanie Restivo's jiggling junk a playful smack in National Lampoon's Dirty Movie (2010).