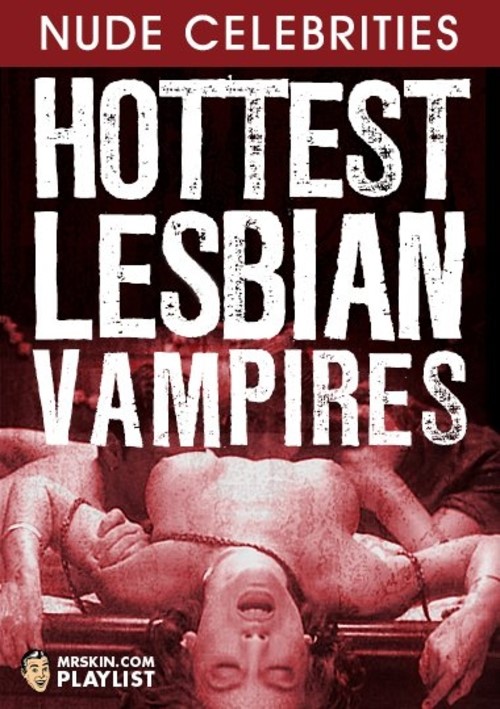 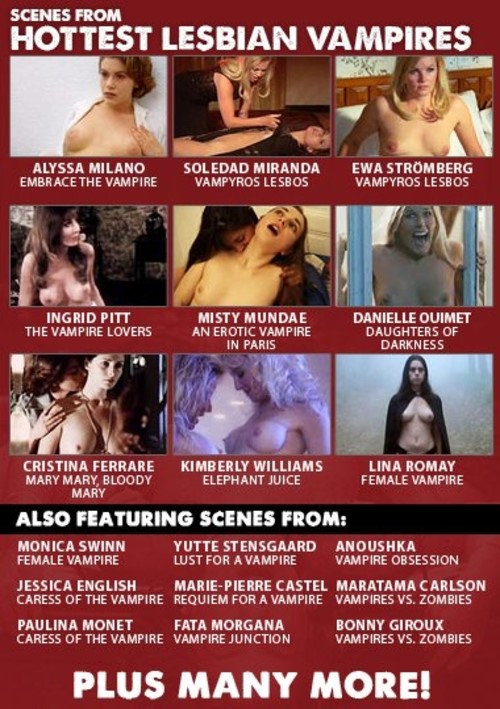 Mr. Skin&#39;s Hottest Lesbian Vampires
Horror hooters are great, but nothing will get your b lood pumping quicker than two ladies turning to the dark side together. So get you stake ready for the eternally damned depravity of Mr. Skin's Hottest Lesbian Vampires. Alyssa Milano gets pulses pounding as she succumbs her supple suckers to a very hands- (and mouth-) on photographer, then more boobage later as she fantasizes about an orgy in Embrace of the Vampire, Susan Sarandon and her massive melons get seduced by the supernatural lust of Catherine Deneuve in The Hunger, Eileen Daly sinks her teeth into a lesbian mam slam in Razor Blade Smile, Soledad Miranda writhes her bitable bitties on the floor then feels up every inch of and entranced blonde in Vampyros Lesbos, Soledad Miranda's creamy cupcakes sucked on by a vixenish vampire in Vampyros Lesbos, Ewa Strömberg gets stripped down to her fluffy muff by a voluptuous vampire with a taste for her juices in Vampyros Lesbos, Ingrid Pitt gets her mams moist in a bath then gets out and chases her nubile gal-pal Madeline Smith into bed in The Vampire Lovers, Paloma Picasso gets her clothes ripped off at an orgy to show funbags and nice frontal furriness in Immoral Tales, Paloma Picasso gives up udderly amazing full frontal while dipping her damned donut in a pool of bl ood in Immoral Tales, Paloma Picasso compares furburgers with an equally nude friend while lying on the floor in Immoral Tales, Paloma Picasso shows off her full bikini biscuit and butterbags wearing only an open rob in Immoral Tales, Misty Mundae bares every inch while getting graphical sapphic with the undead udders of Tina Krause in An Erotic Vampire in Paris, Misty Mundae serves up her mini-mans and front fur for the fangs of a femme fatale in Lust for Dracula, Bloo dsucking babes Marianne Morris and Anulka Dziubinska seduce a few men into their lair but really only want to suck on each other in as the get to carpet munching in the bed, in the shower, and next to the body of one of their victims in Vampyres, Sally Faulkner shows off her succulent skin sacks and bush in bed with a guy then later she gets striped and slashed by blo odthirsty babes in Vampyres, Danielle Ouimet dishes out her danglers to suck face with the sun-shunning sexpot Delphine Seyrig in Daughters of Darkness, Brick Randall submits her silicon sweater meat to a full body rubdown by her muffin muncher pal in The Erotic Rites of Countess Dracula, Cristina Ferrare lets her muff diving friend unveils her amazing orbs in Mary Mary, Blo ody Mary, Barbi Leigh flashes fake funbags and shaved sugar basin while she gets felt up and munched on by a babe in the shower in G-String Vampire, Lina Romay pleasures her pink palace while writhing on the tanned nude form of another hairy honey in Female Vampire, Lina Romay shows her Transylvanian titties and dense crotch thicket as she bathes in bl ood in Female Vampire, Monica Swinn gets her clothes torn off so two damned dame can feast on her nubile num-nums and hair pie in Female Vampire, Jessica English brings out her stupendous stack to knock knuckle sandwiches along with the depraved danglers of Paulina Monet in Caress of the Vampire, Paulina Monet's massive mams get pressed against the equally impressive knockers of Darien Price in Caress of the Vampire, Yutte Stensgaard gets a Sapphic backrub from a hungry blonde while her tanned tatas hang out Lust for a Vampire, Yutte Stensgaard strips down to show off her fantastic front then shares a kiss during a slippery skinny dip with Pippa Steel in Lust for a Vampire Marie-Pierre Castel and Mireille Dargent explore their lesbian urges by petting each other on a fur bedspread in Requiem for a Vampire, Fata Morgana lets an undead hussy shave her kitty then lick up the cream in Vampire Junction, Fata Morgana gets her clam baked while her bloodthirsty lady friend shoves her spread beav in her face in Vampire Junction then the pair gets down to some supernatural scissoring, Anoushka gets ravished by a coven of cuties as three ladies take turns sucking each others exposed flesh in Vampire Obsession, Buxom blonde Maratama Carlson gets a juicy mouthful of Bonny Giroux in Vampires vs. Zombies, Bonny Giroux shows off her bitable badoinkees while getting her poon polished by Maratama Carlson in Vampires vs. Zombies, Rosanna Yanni bares bl oody boobies to the razor-sharp incisors of two creatures of the night in Count Dracula's Great Love, Kellie Brown gets her tan cans clean in the bath before getting sucked on by a in lesbo licker in Dracula's Dirty Daughter, lysabeth Clements gets stakes pounding when she reveals her Countess Rackula in Dracula's Dirty Daughter, Anne Libert unleashes her boobs, buns, and bush to collide cathedrals with a lusty lady in La Fille de Dracula then the pair compares furburgers and funbags while writhing around in bed.